This is the starting page of Wikimabia. Here, you can find information on Mabia languages, VP-particles, focus theory, and other topics related to the project. 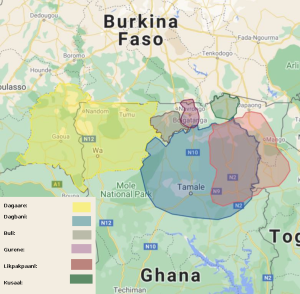 Region of some Mabia languages
The Mabia languages (obsolete name: Gur languages) belong to the Niger–Congo languages. There are about 70 languages belonging to this group. They are spoken in the Sahelian and Savanna regions of West Africa, namely in Burkina Faso, southern Mali, northeastern Ivory Coast, the northern halves of Ghana and Togo, northwestern Benin, and southwestern Niger. Additionally, a single Mabia language, Baatonum, is spoken in the extreme northwest of Nigeria.